The department of Physics was established in the year 1951. The infrastructure and the labs were set up under the able guidance of Prof. V. S. Shah who was the founder head. He was the head from 1951 to 1982 till he retired from active services.

Prof. Shah started the department in two large labs and a dark room now known as senior Physics lab (measuring 17 Mtr. X 12 Mtr.), & Junior Physics Lab. (19 Mtr. X 12 Mtr.) (7.25 Mtr. X 6.25 Mtr.) (Sq. Dimension). The two labs were equipped with all the necessary equipment’s needed for UG and PG curriculum. These were also upgraded as and when required. The dark room was so designed, by giving many ports to the same light source that a greater number of students could work from the same light source at any given point of time. Enough working space and dedicated lamps were provided for each set up and effective compartmentalization was done for each set up so that students from one experiment would not disturb the students working on the other experiment. Staff was trained in house to maintain & run the labs during his tenure. After his retirement Prof. B. B. Desai trained under Prof. V. S. Shah became the head.

Prof. B. B. Desai became the head in 1982 and remained as a head till 1988. Under his guidance core course in electronics were started for the students of B.Sc. This course was offered to B.Sc.III rd. students in place of Chemistry the students were offered electronics. Electronics was a very new subject at that time and this helped in creating awareness in the students towards this subject. He retired in 1988 and the mantle was taken over by Prof. C. C. Patel.

Prof. C. C. Patel realized the potential of Electronics as a separate subject. He was a great motivator and with the result, Electronics was set up as a separate subject in his time. He encouraged the faculty to indigenously develop and design experimental setups which are now commercially mass produced. Under his guidance the faculty fabricated experiments with many innovative ideas. Close on heels of Electronics it was followed by Computer Sciences. By the time he left the department the foundation of computer was already laid. His successor Prof. S. P. Bhindwale took the charge from him in 1991.

Prof. Bhindwale saw to the setting up of the computer department as a separate identity and by the time he retired Electronics and Computer Sciences were separate department having their own staff and infrastructure. He was seceded by Prof. A. K. Topiwala in 1995.

Prof. A. K. Topiwala remained, head for a very short Span of time, but helped standardizing the lab. He was followed by Prof. P. K. Dubey who took charged in 1996.

Dr. P. K. Dubey has been responsible to look after the department. The department now has experiments on Lasers which were introduced for the first time at B. Sc. Level in our institution. He was followed by Dr. Pravin A. Kekre.

Dr. Pravin Kekre is looking after the department since 2016.Periodic lectures from subject experts, seminars, routine tests, assignments have been introduced as a part of the regular functioning of the department. The department also conducted a seminar to celebrate world year of physics recently in which scholars from various areas of Physics participated, which proved to be of a great benefit for the students, and teaching community in connected with the subject of physics.

B.Sc. with intake capacity of 680 students

VARIOUS ACTIVITY RUN BY DEPARTMENT FOR UG AND PG STUDENTS: 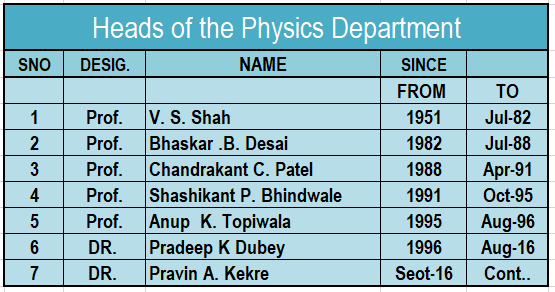